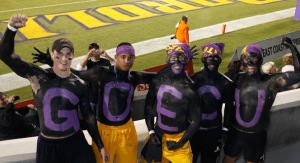 Pirate Nation Rises: The Loud and Proud – like these maniacs – showed up. (ECU Media Relations)

It would be easy to start in with all the complaints related to last night’s 35-20 loss at home to North Carolina. Yep, it would have been decent of the officials to call pass interference or holding at least once or twice in the game. But, I am taking a different approach in this entry…let’s call it the optimistic view of a 1-3 start to the season.

Losing to UNC-CH hurts, no two ways to cut it, but we learned a lot from last night’s loss about this team – as we have in the two losses to USC and Virginia Tech. 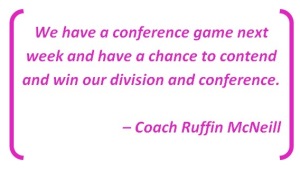 ). This ECU team is a young team – a talented team – but truthfully, overall, a young team that when facing veteran, AQ-stocked teams, simply is just shy of being able to get it done. More reality…this is a good Pirate football team and one that has every opportunity to get back to the C-USA Championship game. Reality…that should be this team’s goal and should be a good enough goal for the fans given the youth of this team.

Second, I think it is equally obvious some of the positives we have seen in the three losses and, in particular, in the UNC loss.

To start with…particularly specific to last night’s game. The ECU fans showed up – and have so far this season. The students, the alums, the local fanbase kicked immense butt last night and deserves a virtual applaud. They are doing their part in spades. Just had to get that out there.

On the field, here are the things that are giving me tons of confidence in this team as we start to dig in for CUSA play.

The offense, despite its youth – in the form of turnovers – can be dominating. Against UNC, the first drive of the game was indicative of this. The Pirates rolled down the field and were primed to open the game with a score when the turnover killed it. Davis is playing well…very well. His receivers…have been mixed. Lance Lewis is a pro-caliber stud and shows it again and again. Justin Hardy is a guy who simply has “it.” What a star in the making. It was great to see the old Boddenheimer back again. His blocking, tenacious catching, and YAC busting were a relief to see as he seemed out of sync in the firs three games. Mike Bowman seems to be finding his rhythm again after  a tough on and off the field start. Justin Jones will be a factor in CUSA and Danny Webster has potential, though – in my opinion – he is being asked to do too much for a true freshman given the guys we have on the bench. Joe Womack is dependable and it was great to see Reese Wiggins get a catch. The offensive line is young, but you can see each game what has OC Lincoln Riley so excited. Mistakes or no, this unit is nothing if not aggressive and pretty darn technically sound. If we can keep them healthy in together the next few years are going to be fun. Reggie Bullock – though he is on notice about the fumbles – is a legitimate threat and he is showing – pacing his way to a 1,000 yard season. He could light CUSA up.

Defensively, if you point to scoring defense to complain about this unit…don’t waste your breath with me. The offense has really stuck it to our young defense and despite that, they have held up well. Are they stellar – not even close. But, they are getting stops against strong teams. They play an exciting brand of defense and they are physical. Michael Brooks has simply been a beast and Jeremy Grove and Daniel Drake – IMO – have been just what the doctor ordered. Unassuming bashers. The secondary is good, real good, particularly by CUSA standards – particularly when Derek Blacknall is in and healthy.

Special teams has done fairly well across the board as well.

There is a lot to be excited about with this team, despite the 1-3 record and I would be completely satisfied with a CUSA championship appearance, which is more than achievable by this group.

I am going to say it now, the Pirates will win the East if they do not succumb to injuries.

0 comments on “Reality Bites, but Football Future is Bright”