I didn’t think I would be able to tune in and watch the College World Series after the Pirates loss in the Super Regionals, but reflecting on the season and the players and their impact on ECU, its fans, and well, my own psyche, I was able to tune in and enjoy watching other teams compete for the prize we are so determined to one day bring home to Greenville. Yes, I am pulling for Michigan and former Pirates Erik Bakich. Seeing him in the “23” jersey at least gives Pirate fans some small measure of knowing that Coach LeClair has a Pirate smile looking over the Wolverines and our proud fan base. 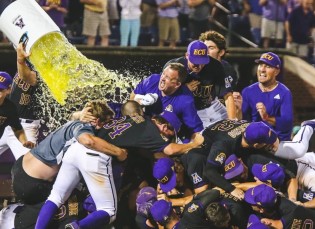 Pirate Baseball as it should be…winning titles. The mission has not changed!

Yes, Omaha, the Pirates are still grinding your way. And perhaps there is some little bit of me that doesn’t want the climb to end…it has been such a rallying point. And, I don’t mind seeing Coach wearing #23 for another season. Trophy case can manage without it for another season or so.

What has begun to hit me though, is the thought of the Pirates lining up next season without Bryant Packard and Spencer Brickhouse and Jake Washer, and Jake Agnos and Tuner Brown and Trey Benton, and Evan Voliva – all drafted this year into Major League Baseball.  And Brady  Lloyd, Chandler Jenkins, Zach Barnes, Sam Lanier, and Matt Bridges…also heading on…these guys are all such a big part of the program. 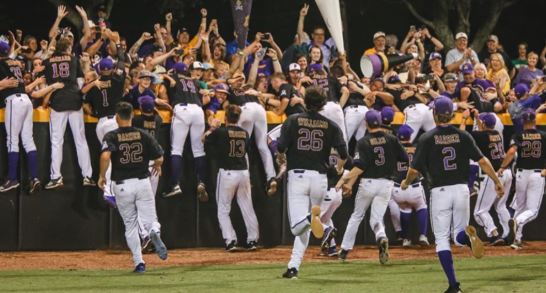 This team has created a connection to its fans/students that is unlike any other in the world of college baseball.

Particulary, for me, Pack, Brick, Washer, TB, Lloyd, and Agnos moving on is having the same impact that hit me when Dwayne Harris, Shane Carden, Justin Hardy, and Zay Jones left. Their personalities and engagement with the fans and students was so big, that it magnified their game and leaves you with a sense of loss now that they are all moving on. Gonna be hard to connect without those guys here, but thank God,  Pirate star Alec Burleson returns to lead some bright young stars as they rise to make their own marks on the program next season. They will be good for sure and the personalities will emerge.

Sad as it is to close the door on a great baseball season, there is a new era of Pirate football pulling up anchor in Greenville and at this time of the year, there is a ton of hope that new coach Mike Houston has been quietly retooling a team that Pirates fans are hoping will stun this year in DFS.

Perhaps it is negativity fatigue, but there seems to be nothing but positive buzz coming out of ECU since last year’s hiring of the former James Madison coach.

It has been many years, since Coach Ruff’s final preseason to be exact, since the air has been breathable around the Pirates program. There were rumblings of discontent following Lincoln Riley’s departure to Oklahoma and those grumblings persisted through Ruff’s firing and Coach Mo’s hiring through to his firing just three seasons later. 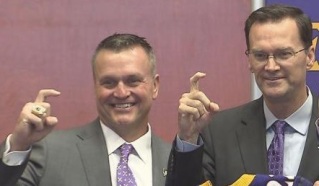 Once a Pirate…Houston and Gilbert have emotionally embraced the community.

When it ain’t right, Pirates know…they just do. And when it’s right, well…Pirates know that too and right now, it all just feels right in Greenville. And why not? The fan base got a double boost heading into the spring with the hiring of Houston preceded by the hiring of Jon Gilbert, a savvy AD who knows a thing or two about doing more with less in college towns. Back-to-back homers IMO.

So, now, all attention in Greenville turns to the football program as the downhill slide to August preseason camp begins to pick up pace. The spring has provided the new staff with a glimpse at what talent and attitudes exist within the program and now, it is time to start tightening everything down ahead of fall camp.

Coach Houston and AD Gilbert have been doing everything they can to return the fan base back to DFS this fall. Season tickets sales have picked up following dismal lows over the last three years. The fans have to come back of the program is to rise up. Remember how this felt? Or this? Or, one of my all-time favorites…Arghhh?

If they rebuild it…everyone will come (back).

On paper, the Pirates should have a good baseline from which Houston can begin transformation back into a competitive program. The offense and defense each return 7 starters and if there is a silver lining in so much failure over the last three seasons, many of the youngsters have experience already. 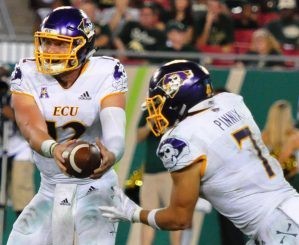 IMO, Ahlers & Pinnix will be pivotal for the offensive success this season.

Offensively, the experience lies where you want it: at Quarterback and on the offensive line. It is expected that true sophomore Holton Ahlers – a lefty with the propensity to run like a linebacker who finally gets to carry the football in mop up action – will win the starting job over an experienced passer Reid Herring (jr). This gives the ECU offense two very capable QBs both of whom have starter experience. There is a good mix of experience (starter and back up) across the offensive line roster to provide realistic hope that veteran Coach Steve Shankweiler can again work magic and fast-track together a balanced and able O-Line. This is critical so that Ahlers can settle in as a Passer who hurts you with the occasional run and lets the RBs carry the ground cargo the most.

if the OL can be good to better-than-good, then the RBs we have should be more than ok. You have to think that Darius Pinnix (jr) has pretty much demonstrated that he can excel as both a power runner and a pass catcher. He has the goods and the mindset to be very good and I expect a big season from him. The other backs are all very capable to fulfill various situational needs (shifty, quick hitter, home run, etc.) out of the RB corps.

And finally, IMO, this is right kind of season to NOT HAVE a premier receiver on the roster. With the utilization of a TE for the Pirates (notably Anthony Whatley (sr) and 6-7 newcomer Zech Byrd (so)), the WR corps should be very able to play pitch and catch with Ahlers. While I do expect Deondre Farrier (sr) and Blake Proehl (So) to have break out seasons, the corps is so full of good hands that barring complete failure by the OL to protect, passing should not be an issue. The Pirates are 8-9 deep in the position.

Flipping to the D, the unit could really use a complete return to fundamental football. Departing DC David Blackwell demonstrated enough last season to show that the players are capable of playing defense…he simply didn’t have enough time to complete the re-education process. New DC Bob Trott and his decades of coaching should have already affected further change in the mindset and structure defensively for the Pirates. Expect drastic improvement here. 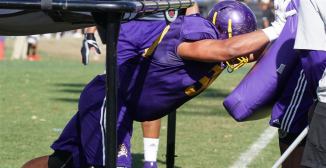 Turner on the grind. Alex is the heart & soul of the defense and will need to lead.

Like the offense, 7 starters return. However, the challenge is much bigger on the defensive side of the football. Yes, last year’s DC David Blackwell did a great job getting the defense out of the college football basement (having ranked dead last at 130th in 2017) to an end of 2018 rating of 99th, the bottom line is that ECU has struggled to play good defense for several years. There have been and are some outstanding defensive players, but as a unit…not so good. Part of it is due to high turnover rates by the offense but moreso, it simply has been a fact that the Pirates defense has not been able to create turnovers on par with even the middle-of-the-road defenses. It is easy math: If your offense is turning the ball over a lot and your defense is taking the ball away very little then you lose…a lot…and by big margins.

New DC Bob Trott has his work cut out and those decades of coaching D are certainly going to be needed in full, but there are some talented athletes on the roster to build around. Starting with DT Alex Turner (sr). Turner, it could be argued, was a big part of departing Sack Master DE Nate Harvey’s success at ECU. Harvey enjoyed a lot of freedom on the edge thanks to Turner’s play inside. Smart and powerful, he provides a good base to build from up front. The D needs one of its DEs to assume the pressure role that Harvey created a season ago and depth may be a concern, but the line has some potential.

Athletically, the LBs and secondary players are there, the question is, can they follow assignments collectively and can they tackle. Tackling has been a major issue for ECU in the last few years and it must be corrected. Last year, the defense started to be in right place but still struggled to finish off plays. The LBs, particularly the inside guys have to be assignment correct and sure tacklers. And, they need to tackle up field not down. Same for the DBs.

I once played on a team where our MLB was overhead by our DC bragging about how he had already notched 100 tackles on the season to whit, our DC interrupted his brag session to point out that 100 tackles all 10 yards down field didn’t really make for a great tackler. Likewise, the Pirates – not just the LBs – but all of them have to be sure tacklers making the play where it matters. We have not seen enough evidence to count on that.

And, the secondary has really struggled to find the football. Busted coverages, late to help, and losing one-on-one battles for the ball have really been a hallmark of ECU’s defensive units of late.

As I have said over and again, we have seen this situation at ECU before and it has rectified in one off-season. But there is a formula: Sound Coach + Coachable good football players = drastically improved defense. It can be done and the ECU D doesn’t need to be Top-10 to flip the scoreboard our way…they need to be solid – middle of the pack.

Can the Pirates pull a turnaround as steep as UCF did a few years back? Not likely and that isn’t the measure of success for Coach Houston. However, it is fair to expect the offense to be much improved this season and with that, the defense could have time to improve as well.

IMO, a winning season is not a long shot, but it may require a few breaks along the way. Heck, I’d be pleased with any win count greater than 3 and being competitive in every game on the slate. Either way, Coach Houston and his staff have re-ignited the fire in the fan base and if they have also done so with the players, it should make for a very exciting football season.