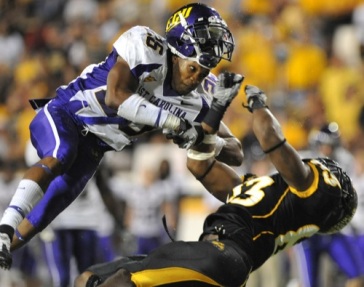 ECU Knock Out or ECU Knocked Out? A lot to be learned come Saturday in Mississippi.

Expectations were very high for this ECU team coming into the season. With a defense that appeared primed to step up, a receiving corps that is without question very good and deep, and an offensive line with experience.

Through two games, however, the Pirates look anything but on the rise. Instead, the defense looks confused, the receivers look frustrated, and the effective offensive line is scratching its collective head saying, “WTF?”

After a closer-than-the-score looks win over Appalachian State and a thorough butt-kicking from No. 9 South Carolina, what the 2012 Pirates are, is a mystery to those who follow the program.

And, whispers are starting, as people try to figure out how we can be regressing in year three. Is it coaching? Is it talent? Is it really just about a quarterback? How did a defensive front seven that looked so promising down the stretch a year ago return so much talent and look so bad? Where is that chip? Where is that swagger? Where is a pulse?

There are a lot of questions to be answered and the Pirates couldn’t have asked for a better opportunity than the one they have this weekend to show the Pirate Nation who believes so much in this team that they are worth the effort the fans put in.

In Southern Miss, they get to go on the road to face a quality opponent in the biggest CUSA game of the year for this team with a chance to put it together and collectively shout: “We are here and we are not going away!”

The last thing this team needed was a game against a walkover at this point. We need a game that has meaning…that is a challenge to their pride…that will tell all of us – including the players themselves – are we a football team or not?

There is no talent differential to complain about, no offense or defense so decisively better than ours, no fanbase that is going to be the 12th man and no coaching staff on the other sideline with greater credentials than our own. Nope, just two similarly talented teams.

If our Pirates put it together this weekend and pull the upset and do so in a solid, fundamentally sound way…then the season really will reset itself, giving us all something to cheer about and our team a realistic chance to achieve some of its goals.

If they go to Hattiesburg, turn the ball over 4-5 times, give up another 400+ yards and get dusted, then I wouldn’t count on things getting any better over the next 9 weeks. IMO, this weekend is THAT BIG. And if this team has any content to its character and if this coaching staff is the one that is going to be here forever, shepherding us to the promised land, then it has to happen this weekend. It just does. Because if it doesn’t then it only serves as further evidence that we have fallen further behind, that we cannot correct obvious errors, that we are incapable of a Plan B or an adjustment to changing in-game environments, that our guys when faced with having to whip the guy in front of them, come up on the wrong side each time.

This one is about what is between the ears and in the chest of every player on the team and every coach on the staff.

Hoping that our boys answer the call.

14 responses to “Opportunity Knocks this Weekend”